What do ROI (return on investment) and the garden of Eden have in common?

I was giving a facilitator’s presentation(1) today at the Da Vinci institute. Driving back from Kempton Park I saw one of these retro taxi cabs. You can partly see it in the photo below. The topic I facilitated on was about spirituality in the workplace, or as I put it ‘Spirituality comes standard.’ It had a lot to do with linking creativity and some values to spirituality.

The retro cab was looking really creative I thought, except for one thing. It was falling apart. More ironic was the fact that the vehicle branding was promoting Dial-Direct insurance. And I was wondering whether the cab looked like that since Dial-Direct insurance might not have wanted to repair it. So, the first significant question:

I wonder what Dial-Direct’s return on investment (ROI) is for their vehicle branded marketing (rhetorical question, and anyone can guess the answer). 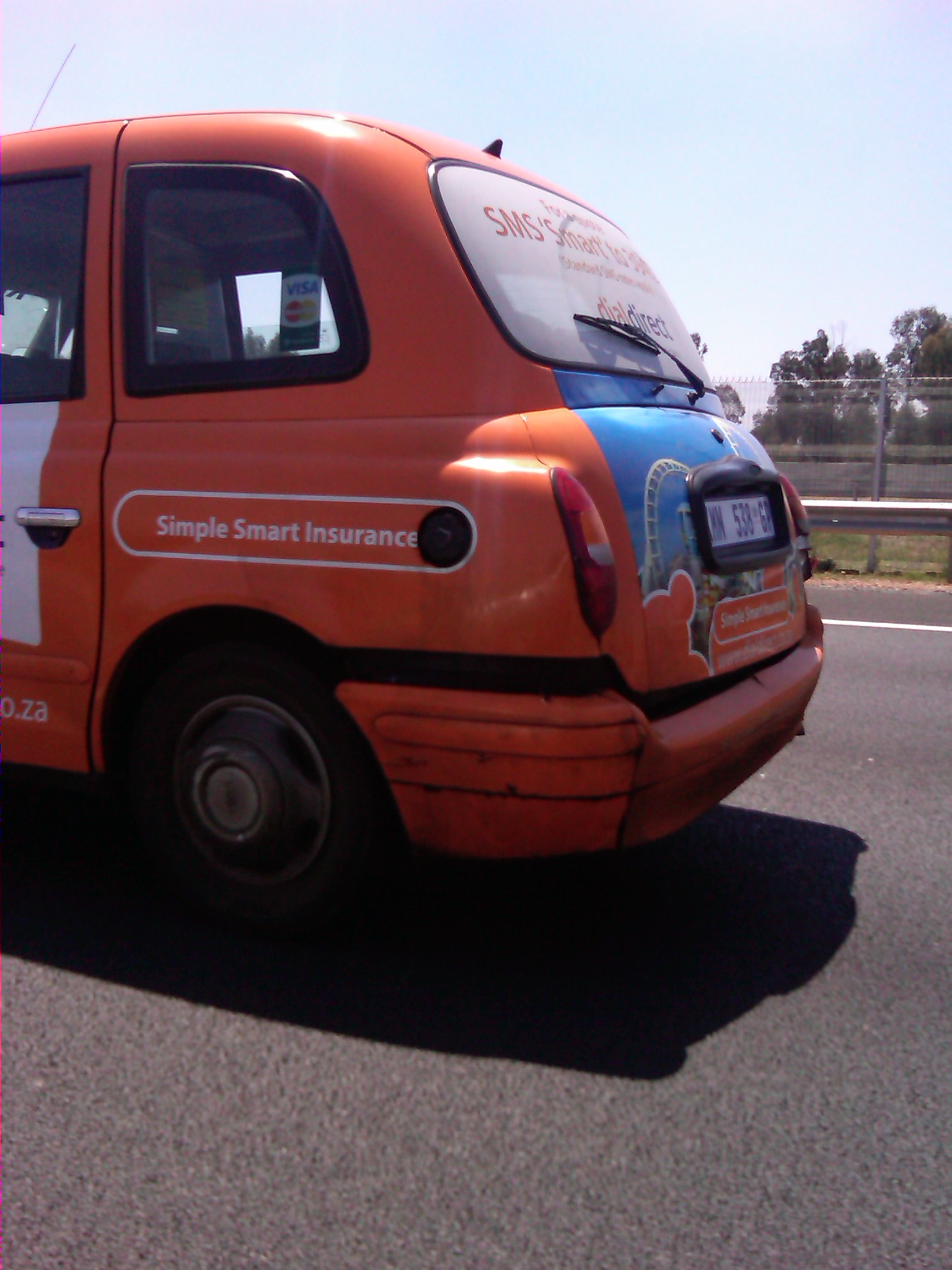 Retro taxi cab falling apart. Makes you wonder what the ROI is on this Dial-Direct branded vehicle.

The way that I introduced the concept of spirituality was through a tag-cloud on management. We wrote down all the words that relate to management and business that were top of mind to the group. Then I wrote on the board the word spirituality and asked whether   it fits in with the other ideas. I then misguided their focus buy opening up the Bhagavad gita (a universal jewel of Indian wisdom literature) and fake reading it. What I recited was actually from Peter Drucker, 1954, the Practice of Management where he noted:

It is the spirit that motives, that calls upon a man’s reserves of dedication and effort, that decides whether he will give his best or just enough to get by.

So in my mind, also in line with a lot of theoretical and empirical support spirituality (as opposed to religiosity) in organisations really matters.

Back to the facilitation. At the centre of the tag-cloud  to get things going, I wrote ‘ROI.’ That got even me thinking, and I designed the facilitation experience. Second pivotal question:

What is the return on investment for fostering spirituality at work?

I’ll answer that question elsewhere and post the link here. To those concerned about the bottom line and nothing else: Yes it does add shareholder value. There are however many other reasons why organisations would want to acknowledge and facilitate spirituality in the workplace.

At this junction however my musing is only about

What is the earliest form of ROI?

Does it come from the explorer era or perhaps the early industrial age. Although not named accordingly, I think ROI has a very significant mythical beginning and if I was still a minister I might do a sermon series on this. Yup my friend, it comes from the garden of Eden and Eve when the snake offered her the forbidden fruit. Focusing Eve’s attention on the fruit the snake spun her a version of a forthcoming reality that suggested to her “Your return on investment is astronomical!” After all just imagine if you can be like God…

One of the best sales techniques is asking a prospect to imagine how he or she could use the product in their life. Once you’re there and you’ve imagined the possibilities (once you’ve used your imagination and creativity), it’s very hard not to look back; or, not to look at the ‘apple’ shining as it hangs on a branch and then gripping your teeth into it as if you’re rock climbing with your face.

Simply put: What do ROI and the garden of Eden have in common?  That’s probably where the first reflection on return on investment took place.

What is your connotation with the idea of ROI?

[ (1) Formally the idea of a facilitator’s-presentation is a bit of a contradiction.[]