Yes I know, you would not have thought about Theology in organisations; let alone what this thing of ‘Practical Theology’ is. And for various reasons it’s okay that you don’t know about it even though some aspects have been around long before modern consulting. Think hundreds of years. In many respects the three siblings of psychology, philosophy, and the theology grew up together but that’s a story for another day. 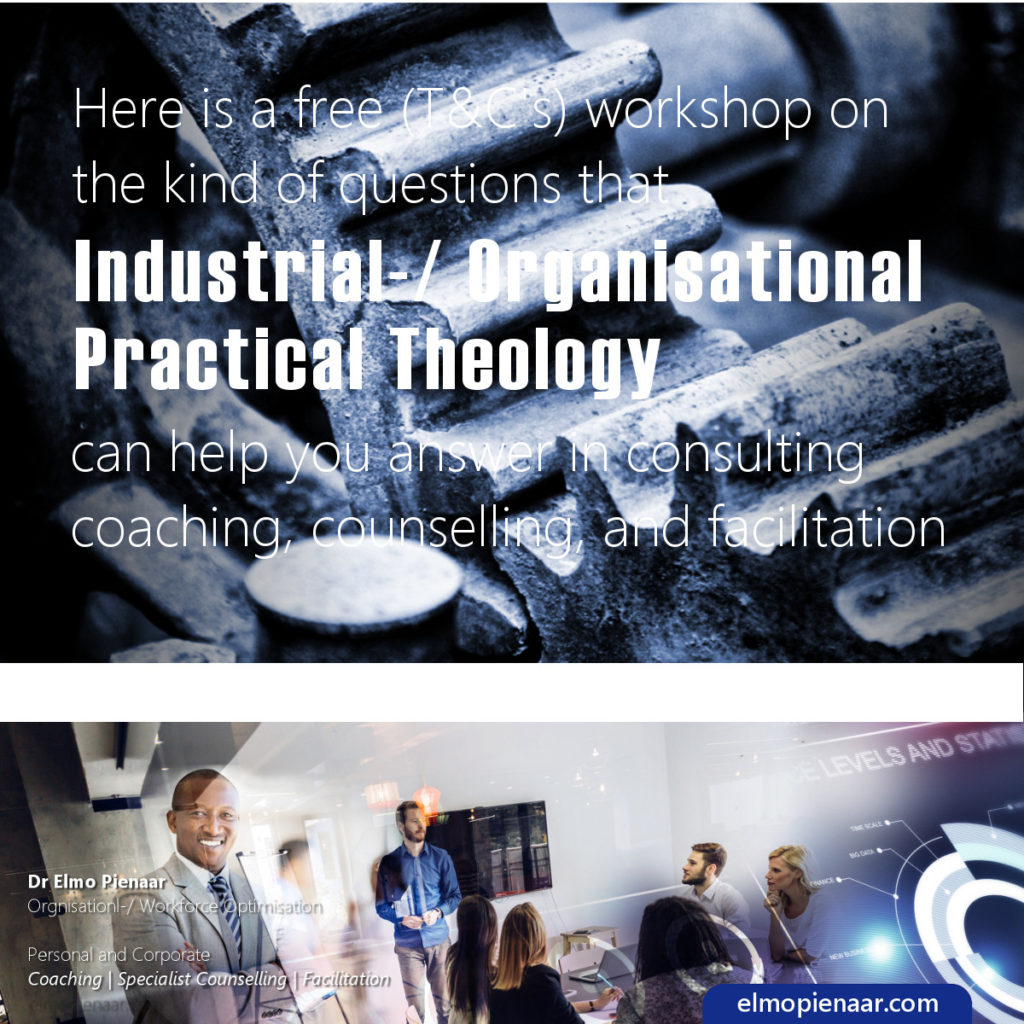 Now I can’t explain in depth, nor give you an experience of what I’m talking about in a ‘post.’ That’s why you should invite me. Let me then just raise a couple of points to get you over the initial shock of thinking theology-organisations.

I think the most important thing to clear up straight away is that as far as organisational work is concerned this has nothing to do with the practice of doctrine (maybe at a very deep theoretical level, but that is certainly not what’s going to show in your organisation).

The second thing that is top of the clear-this-up-for-clients list is that, to the extent that there might be scope of practice for spirituality it is decidedly an inclusive enterprise; of race, gender, ethnicity, age, culture, and religion.

What might help is to think about the diversity in psychology for a moment. Psychologists make their home in different contexts and around different topics. Educational psychologists work broadly in that context. Counselling Psychologists, facilitate or counsel. Research Psychologists mainly involve themselves in research. And of course, Industrial-/ Organisational Psychologists have specified their context as organisations. We’ll not focus today on how these differences between them are in many respects superficial (as it relates to scope of practice, methodology and more).

Likewise, Industrial-/Organisational Practical Theologians have specified their context as organisations (often instead of congregations or perhaps working in both). Practical Theology in turn (among several peer theological disciplines) consists of subdisciplines. This is where it really gets interesting. In the past these subdisciplines were tied strongly to what ministers/pastors actually end up doing in the congregations. This has changed, and it needed to, but the idea remains helpful.

Doing things with the bigger picture in mind

It means that for decades upon decades there were roles that pastors took on that were informed by the bigger picture of what everything is about in life and for communities. But whatever the bigger picture (which is not necessarily part of the client consulting), they did stuff. And now the context changed from congregations to organisations (or other types of communities). Besides the obvious of ‘preaching’ the two most easily digestible aspects involved 1) ‘care’ such as through pastoral care and counselling (think human behaviour and relationships) and 2) ‘congregational studies’ [the churchee equivalent of organisational studies] involved with managing itself, thinking about its office bearer roles, purpose, structures, the collective, the whole notion of church in society (along with Missiology and the Science of Religion) and more.

You actually have to study (and pay for your studies)

It should also be noted that in order to do what you do as an Industrial Organisational Practical Theologian it is not something that you go for training on a quick weekend course. In fact, you might study eleven years for it at a tertiary academic institution. That’s without flunking!

It doesn’t mean there aren’t any gaps in the system. There are and there also some work to do to broaden the horison. That’s the case all over the world and in all education. For one thing, I don’t think students have a good grasp of their value contribution. They are not helped to see this because although the training is relevant it is not framed as an option.

In then end organisations brutally ask just one question. Can you do the job? It’s not a pretty question but the answer is yes!